As a Cuse fan I'm watching to see what other upstate NY teams might get in. Canisius is co-leader of the MAAC, and I'd project them as a 16 (or a low 15 with upsets) if they win the MAAC tourney. Rider's profile is considerably better. Same for Niagara, who lost to Canisius on Wednesday. I think either is capable of beating Rider, but being capable and going out and doing it are two different things.

Bonaventure is in for now, and I moved them out of the play-in for the moment. Bona's problem is that the other teams around them on the bubble have many more chances to pull off a big win and move up the ladder than they do, since the A-10 is in sort of a down year for them. They are probably a 11/play-in team.

I suppose Buffalo could get in as well. While for now I have them as a 13, I think that if the committee still values RPI at all they'll get a bump up to 12. They're not MTSU by any means, and by ESPN's strength of record alone they could be as low as a 14, but I don't think the committee will completely abandon RPI and so I think UB will push Vermont off the 12 line in the end (if they make it). Not sure that Toledo would do that though.

The other schools in the state aren't likely to make much noise.

As to Syracuse, I think that they need to beat BC and Clemson (or Duke, I guess) and then make the ACC quarters to feel safe. And by "safe" I mean probably no higher than a 10. 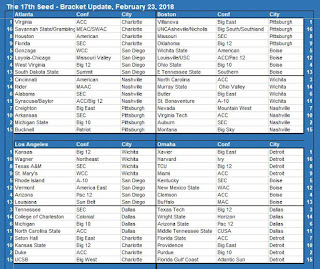