Okay, so nearly two dozen schools have been named in this latest NCAA scandal, and it sounds like a doozy. We're not talking about mid-majors or mediocre teams in the power conferences. We're talking about several blueblood teams. I'm not going to get into the particulars, and I have no idea what the NCAA or FBI will do to those involved or how long it will take to get to that point. Instead, we'll play an imaginary game:

What if all the schools named suddenly were declared ineligible for the NCAA tournament this year? 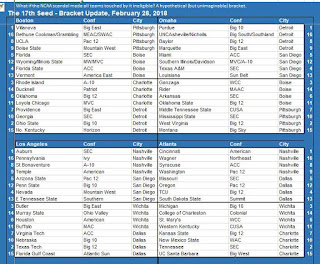 So tonight I set up a bracket that doesn't have 1-seeds Xavier and Kansas and Virginia or 2-seeds UNC, Duke and Michigan State (think about that for a second!). I had to clear out 16 teams I had in my last bracket and another several bubble (and fringe bubble) teams. We're looking at a bracket headed by Villanova, Purdue, Cincinnati and Auburn, with Tennessee, Texas Tech, West Virginia and Ohio State (or Gonzaga, depending on your taste) on the 2-line. Rhode Island's a 3, Nevada's a 4. Middle Tennessee vaults up to a 7, and Bonaventure, Baylor, Syracuse and UCLA are now cozy 8-seeds.

Then we have to look at what the cat dragged in: a mish-mash of bubble teams that have even more warts than the last four I mentioned. Nebraska has 12 Big 10 wins and is on the outside in the real world. Temple has a couple of great wins but is barely in the conversation. Oklahoma State and Georgia??? And yes, that's a Davidson sighting as a play-in - in this scenario, all the 12's are play-ins and the former 12/13 seeds have moved up to solid 11's: Loyola, NM State and Buffalo. I had a terrible time, I might add, sorting through the resumes of these lower-tier at-larges vs the higher-end one-bid schools, and I'd appreciate constructive criticism. I generally used the RPI/SOR/KPI average and my gut.

The rest of the one-bid conferences weren't affected... except in that they get somewhat more vulnerable foes in the first round! Instead of Duke, UCSB could get Tennessee. Instead of Kansas, Wagner might get Auburn. And the high-end one-bidders now get sweet 6-seed matchups or watered-down 4's. It could be a mirage.. but there could also be huge upsets. Lots of 'em.

So this was my take on a what-if scenario. I'm not sayin' it will happen (in fact, I'm pretty sure it won't). But I had fun thinking about it. Not sure how this compared to my Old Big East pipe dream...
Posted by No One at 12:10 AM