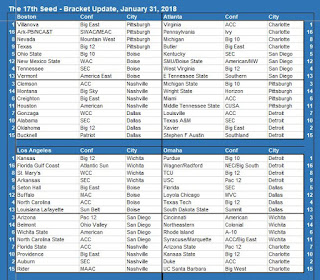 Imagine for a moment that there was a national contest at your school. Each school is to host its own competition, and the winner from each school would get to compete at a national competition. So you worked your butt off and won. But wait! When the contest pairings come out, you learn that since went to a smaller school, you have to compete against winners from other small schools, and if you win THAT time, you’ll get to go to nationals.

If you're reading this then you know this is my analogy for the Play-In Games (PiGs) for the NCAA Tournament.

Think what that means to some of the lower tier conferences. Their school and conference get some national air time. Their representative gets to square off against a top-4 school – likely a once in a lifetime shot. Think what that means for recruiting, for national exposure, to the coaches and individual players! Verne Lundquist and Jim Nantz are going to be discussing them by name! Yeah, the 16’s have never beaten a 1, but some gave their 1’s a major scare (think Princeton vs Georgetown). It’s a great opportunity for these schools.

However, the champions from two conferences will not get that opportunity. They won’t get to play Villanova or Purdue this year, because they’ll have had to travel to Dayton for the Play-in Game (PiG), and they’ll have lost that game against another team from another lower-tier conference.

This is profoundly unfair.

Yes, the PiGs get some viewership. Yes, you get some competitive, exciting games. And yes, teams (and especially coaches) can claim they “made the NCAA Tournament” or even “won a tournament game.”

But losing by 35 to North Carolina on Thursday, with half the country watching, while painful, is very different than losing on Tuesday or Wednesday night before a fraction of the audience. Lose to UNC means you played UNC. You might’ve even hung around for the first half. Lose in Dayton, and few outside your college will even know you played.

You know what’s even worse for the 16’s shunted off to the PiGs? They punched their “tournament” ticket days before (in many cases), only to find out on Selection Sunday that, no, their next opponent is not Kansas, that they still have one more game to win to earn that right. How disappointing must that be for those schools? How frustrating for players and coaches, as they sit with the cameras on, wondering which 1 or 2 seed they’ll be assigned to, only to find it’s a 16 in Dayton that’s on deck for them?

I’d be downright angry. And yeah, I know it’s been the way of things for more than a decade and a half. It doesn’t make it right.

Let’s flip the script a minute. If we’re weeding out two 16’s, that means that a pair of what would’ve been 15’s are now on the 16 line. That means that two 1 seeds that are expecting to play a 16 (which have never knocked off a 1) are really playing 15’s, (which HAVE knocked off 2’s). Indeed, this is true right up the line. A pair of 2-seeds are getting what should be 14’s, and a pair of 3’s are getting 13’s, and so forth. So even if you’re a high seed, you’re very possibly playing a (ever so slightly) better team. I don’t feel a whole lot of sympathy for these schools, but the difference is there.

We know that the first PiG was set up after the split of the WAC and Mountain West, but instead of eliminating an at-large bid, they made the two lowest-seeded teams play their way into the tournament. Again, these teams EARNED BIDS BY WINNING THEIR CONFERENCE TOURNEYS! So Winthrop (which lost the first PiG by four points) was denied access so that either Oklahoma State or Xavier could show up for a cup of coffee and get beat by double digits. How fair was that? So fair that the 2001 Tournament’s Wikipedia page doesn’t even list the score of the play-in game, only that Northwestern State lost to Illinois. Gregg Marshall’s Winthrop team is only mentioned as the second 16 seed in Illinois’s region. Sure, they might’ve lost to Illinois by 42 like NWST did, but that’s not the point. They didn’t get their day in the sun.

So as you can see, I have some empathy for these schools that, you know, actually accomplished something. But I have little empathy for bubble teams. And since the “First Four” concept was established, half the PiGs are for bubble teams to play their way in. That, my friends, is how ALL the First Four games should be.

There are two kinds of bubble teams, as I see it. First are the mediocre power conference teams. Their strength of schedule is propped up by their conference opponents, and they’re around or even below .500 in their conference. They usually have some decent wins to point to, which are often counterbalanced by some poor losses. In other words, they’re inconsistent and mediocre, not what you necessarily need in an NCAA Tournament team. Nobody outside their fan bases will mourn their absence, and they’ll have every shot at getting a bid next year.

The other kind is the mid-major that’s rampaging through their conference after playing a few Big Boys in November and December (but probably not winning those games, or they’d be above the bubble). Think Monmouth in the last couple years, Illinois State, maybe even Valpo in some recent years too. These are often some pretty good, competitive teams playing in weaker conferences, and so while they’re not quite as good as their record says, their strength of schedule makes “the powers that be” underrate or ignore them. You’ll rarely lose money betting that these teams will be left out of the tournament.

I want to see BOTH kinds of bubble teams given a shot in the PiGs.

I want every 16-seed to know it’s going straight to a Thursday/Friday showdown and getting its shot at that season’s hoops royalty in front of the entire country.

I want eight bubble teams to duke it out for the right to eke its way into a double-digit seed. The “last four in” and “first four out” can settle it on the court (the "next four out"... well, sorry).

But wait, you’re thinking. Am I really advocating that the Committee be forced to reach past some bubble teams for teams that in some years might be truly inferior? The answer is yes, because we’re exchanging proven mediocrity (in the form of, say, a 18-13 record) for what MIGHT be mediocrity… or what MIGHT be considerably better (in the form of a 26-win team or conference winner/runner-up that only played a handful of top tier opponents). I just think it’s better to reward mid-major excellence than high-major mediocrity.

The bigger issue is those 16’s. Making the 16’s play their way in is at best completely unfair, and at worst it’s unfair AND a cynical way to make room for the bigger conferences to get their 6th or 7th bids. But changing the PiGs to all-bubble teams, and mandating some room for a couple extra mids, will make the PiGs into true Play-In Games that will involve the teams that most deserve to be in such a game. And if you’re a bubble team that couldn’t get into a Play-In Game, you probably didn’t deserve it anyway – certainly not as much as the 16 that won their conference tournament.
Posted by No One at 2:55 PM No comments: 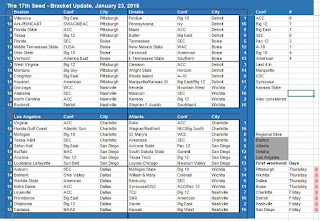 January 15 bracket. Seems like there's lots of movement this year, moreso than last year. Hopefully that'll mean a wide-open tournament where anything can (and will) happen, even more than usual. 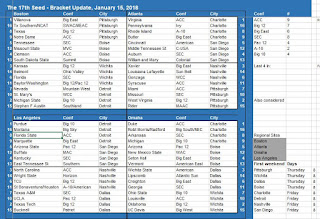 Here's my first bracket of 2018. Hoping to post on Sunday nights from now through Selection Sunday. Still feeling a little rusty, hopefully they'll get better as they go. 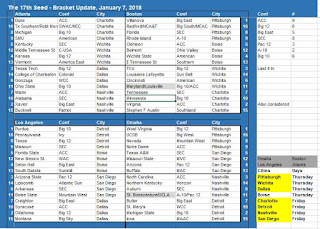